Much of the Golf Course is part of the “Bamburgh Coast and Hills” Site of Special Scientific Interest (“SSSI”) and as a result the club has a management agreement with Natural England to enhance nature conservation. The following are the reasons given by Natural England for the area being an SSSI.

The site known as Bamburgh Coast and Hills is of both geological and biological interest. Exposures of the Whin Sill on Bamburgh Hills support a characteristic flora found only in Northumberland. Maritime and flush communities, with areas of grassland and scrub contribute to the vegetational diversity of the site. 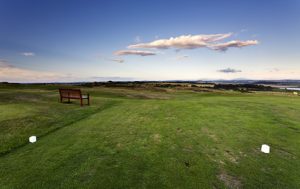 The stands are comparatively extensive and grade to the best representations of heathland on whinstone anywhere in Northumberland. The soils on the Whin Sill are very thin and the plants growing on them are adapted to the harsh conditions (eg summer drought and extremes of temperature) associated with them. The resulting botanical communities are of considerable interest.

In addition to the whinstone grassland there are other habitats of interest, such as coastal heath, dune grassland and flush vegetation, which further diversify the site. A number of nationally scarce plants are found on the SSSI. Additional interest arises from the presence of nesting fulmars in the quarry.

Geologically, the Whin Sill, originally intruded as fluid magma, is a bed of quartz dolerite underlying parts of Northern England and outcropping locally in striking land-form features. Coastal exposures show the Whin Sill in extremely complicated contact with sedimentary rocks. The sill encloses a variety of large, more or less thermally-altered sedimentary blocks and rafts; some of these are flat-lying but others appear to dip steeply. The variety of inclusions and their disturbed relationships suggest that the Sill may be intruding at a pre-existing fault; some evidence of post-sill faulting may be indicated by numerous carbonate-filled fractures which cut the intrusion. Veins with barytes have also been recorded. This site is selected to show the extremely complicated relationships that may develop between the sills and country rocks; the coastal exposures display these complex relationships to best advantage.

The vegetation also reflects maritime influences in the abundance of thrift Armeria maritima, buck’s-horn plantain Plantago coronopus and the presence of common stork’s-bill Erodium cicutarium and sea plantain Plantago maritima. Areas of maritime heath support a dense cover of heather Calluna vulgaris and bell heather with meadow oat-grass, bitter vetch Lathyrus montanus, devil’s-bit scabious Succisa pratensis, hawkweeds Hieracium spp, wood anemone Anemone nemorosa and the uncommon mountain everlasting Antennaria dioica. However, the land tends to revert to invasisve species such as gorse and bracken and there is a constant process of keeping the gorse under control to encourage the vegetation noted above.

Water seepage onto the coastal platform of whin forms a narrow flushed zone which supports common butterwort Pinguicula vulgaris, grass-of-Parnassus Parnassia palustris, marsh lousewort Pedicularis palustris, marsh pennywort Hydrocotyle vulgaris, marsh arrowgrass Triglochin palustris and sea arrowgrass T. maritima and the rare seaside centaury Centaurium littorale. Lastly, the sand dunes edging the course have been recognised as being of international importance, as part of a Special Area of Conservation, and the intertidal land and near shore waters are recognised for their important marine habitats and the wintering purple sandpiper and turnstone populations.

The site consists of a number of dune systems, most of which are accreting and forming suitable conditions for the development of shifting dunes with Ammophila arenaria (Marram grass). Lyme-grass Leymus arenarius is a characteristic species in this habitat type in north-east England, often as an important component. Climbing dunes can occur on steep rocky coasts, as found at Bamburgh. Some of the dune systems support a number of uncommon dune plants, some of which are at the limit of their distribution in the UK.

The species composition of shifting dunes is constrained by the harsh conditions, but the vegetation is by no means uniform. The most marked floristic variation relates to the degree of instability. Where sand accretion is extremely rapid it is possible to find vegetation that consists only of A. arenaria. As rates of sand deposition decline the marram is joined by more species, first by other specialized dune plants, then by less specialized grasses, drought-tolerant annuals and a restricted number of specialized bryophytes such as the moss Tortula ruralis ssp. ruraliformis. This moss plays an important part in completing the stabilisation of the sand surface. Towards the seaward edge of the zone of shifting dunes, salt-tolerant plants such as sea sandwort Honckenya peploides may be prominent, along with the sand-binding sand couch Elytrigia juncea.