There are six teams in Division 1 this year: ourselves, Alnmouth, Alnwick, Dunstanburgh, Goswick and Rothbury. We play each team home and away. League results are on the North Northumberland League (NNL) website:

The team always appreciates supporters to come and watch: we usually have a good number and the matches are usually interesting.

Over ten supporters watched a series of tight matches (apart from Alex's 6&5 win, re-enforcing an unbeaten season in the league) which ended up in an 8 – 4 win. Mark was injured so the regulars were supported by Joe Clements (making a winning return) and Michael Thompson.

As league winners we play in the Dixon Cup later in the season, a competition for winners of all the leagues in the North East. 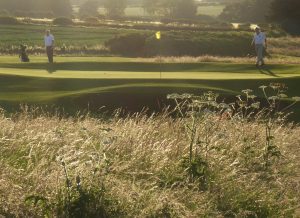 A 10 – 2 win at home gives us an unassailable position in the lead, meaning we have won the League again.

It was a miserable evening and things didn't chime; a couple of the games went to the 18th but we lost 3 – 2. Time to focus on the league!

The conditions were good but the team played particularly well in one of the critical games for the league, ending up with an 11 – 1 win which puts us 17 points in the lead with two matches remaining.

29 June: v Alnwick away
Game abandoned because the course was too wet. Replayed 5 July.

It was a hard gamne at Alnwick, with a couple of losses (and a possible injury for Mark) but at the one we won 8 – 4.

The team beat Magdalene Fields B to go through to the semi final.

At last the conditions were as good as it gets – almost no wind and the course and surrounding scenery looking excellent. The golf was mostly of a high standard as well. Although we got off to a good start all the matches were close, with Michael Thompson in particular finishing one up on the 18th as the sun set over Budle Bay. We won 10-2 in the end.